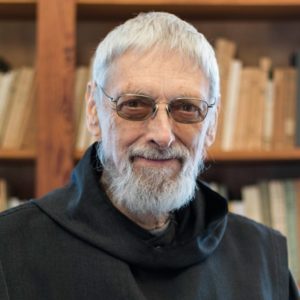 Our Brother Fulco passed away during the night of 22 – 23 March at around 2am, following a long battle with cancer. He was courageous to the end, despite the final 24 hours being difficult for him.

During his final days we were able to spend lots of time with him, keeping watch along with his faithful friends, Alain and Eliane.

On Saturday Br Gaétan celebrated Mass with him and he was able to receive communion. On Tuesday he was too exhausted to be able to celebrate, so Alain and Br Gabriel H. recited the rosary with him. Br Fulco was very much present, moving his lips for the “Hail Marys”. Br Fulco left us between two night watches; he is now in peace.

We are grateful to all the parishioners who accompanied him with their friendship and prayer over the past years. We would like to thank Visitatio for his support, which enabled Br Fulco to depart from this world in peace, surrounded by his brothers.

“We will never forget our dear Fulco:

His name, the longest of names! Fulco Ruffo de Bonneval de La Fare des comtes de Sinopoli de Calabre! All of that had to fit on his identity card! His name always fascinated us”, Br Gabriel recounted in his words of welcome.

“We will never forget his pilgrimages, covering thousands of kilometres by bus, plane and boat, in Israel, Patmos and various shrines all over Europe, with pilgrims from the island of the Réunion and elsewhere, even when he had to use a feeding tube (I won’t mention how he travelled across the world with suitcases full of food sachets and injected his soup when eating in restaurants!).

We will never forget him in Boulogne, his presence at our Wednesdays of the heart, even when he was very weak; how he was able to address everybody present, especially our guests, who were always worried when he was absent and asked after him.

We shall never forget his phenomenal memory – he was capable of recounting thousands of anecdotes about his personal history, his family history, stories of his parents, of the war, about Algeria…

We shall never forget his capacity to make so many friends, thanks to his exceptional qualities of contact, like he did in Algeria or Cameroon. People have already mentioned to the parish secretary, “We’ll really miss him. He always let us know when it was time to take a break together!”

During this time of confinement, the technical means used by the parish of Sainte Cécile to transmit Mass enabled them to livestream the Funeral Mass online, which meant that many people, including his family and friends, were able to participate from their homes. You can find the whole Mass below.

Br Fulco was buried in Rimont on Wednesday, 25 March.

Some news from Cebu, the Philippines

The Brothers of Cebu (Philippines) lived a confinement turned towards the poorest and plan the construction of a future apostolic priory.

Ethiopia: a new chapel is being built

Despite the pandemic, the Epifania project continues to develop in Addis Ababa.